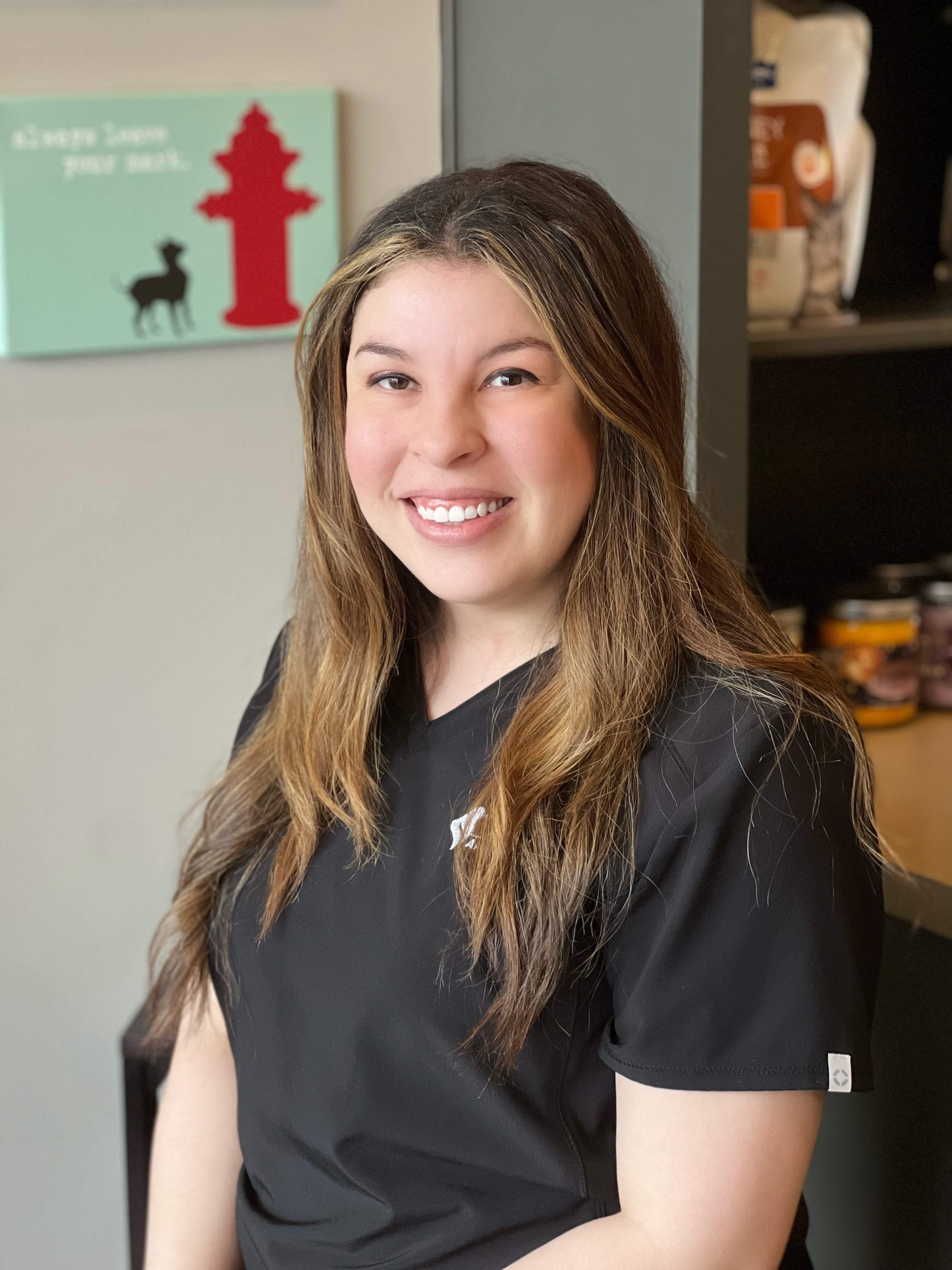 Alyssa Jobe, DVM
Dr. Alyssa Jobe started as an associate veterinarian at Falcon Valley Animal Hospital in September 2018. She is a native Kansan and grew up in the rural town of Paola. Dr. Jobe began her undergraduate education at Allen County Community College where she earned her Associate degree in Applied Science in 2010. She continued her education at Kansas State University, earning her Bachelor of Science in Agriculture degree in 2013 and her Doctorate of Veterinary Medicine in 2016. Her focus has always been small animal general practice. Dr. Jobe always had a passion and love for animals and science which led her to seek a path towards veterinary medicine early in life. In practice, Dr. Jobe truly values the human-animal bond between the clients and patients at Falcon Valley Animal Hospital. Dr. Jobe is a member of the American Veterinary Medical Association. In her spare time, Dr. Jobe enjoys spending time with family and friends, walking/hiking outdoors, and listening to a wide variety of music. She also enjoys spending quality time with her sweet and social husky named Nikita. 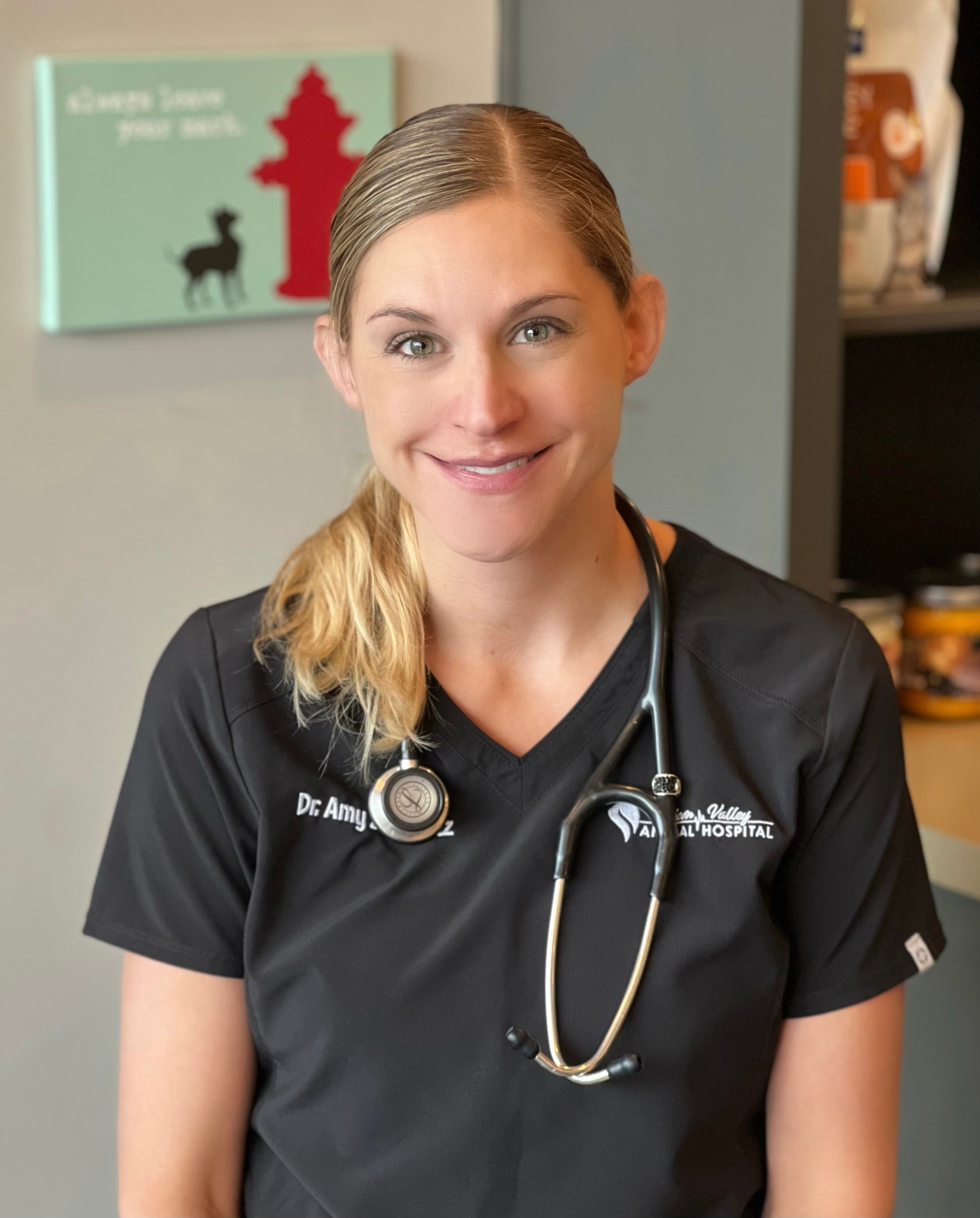 AMY ZEIMETZ, DVM
Dr. Amy Zeimetz started as an associate veterinarian at Falcon Valley Animal Hospital in April 2016. She was born and raised in St. Paul, Minnesota and relocated to Kansas two years ago. Dr. Zeimetz graduated from the University of Minnesota College of Veterinary Medicine in 2009 and has been working as a small animal general practice veterinarian since then. She became a veterinarian because of her love and passion for animals and has enjoyed a career in helping pets and their people. Dr. Zeimetz loves providing quality care to all and especially enjoys dentistry – teeth cleanings and extractions helping to make healthy smiles for pets. In her spare time, she loves gardening, fishing, and spending time with family and friends. She, her husband Scott, and a 2-year-old daughter live on wooded acreage south of Eudora with two cats, Matilda and Deuce, and three dogs, Gulliver, Lorraine, and Geronimo. Recently they have all been busy preparing for the birth of their second child, a baby boy, who is due at the end of May.

MICHAEL STENSTROM, DVM
Dr. Michael Stenstrom, the owner of Falcon Valley Animal Hospital, has cared for pets here as a general practitioner since 2006. A native of White City, Kansas, he became a veterinarian due to his love of animals growing up on his family's farm. While he is not typically doctoring at our clinic, Dr. Stenstrom values the relationship that the veterinarians and staff at Falcon Valley Animal Hospital have with the clients and pets who come in each day. He enjoys filling in for Dr. Jobe or Dr. Zeimetz when they both have to be out of the clinic and we need a helping hand. Dr. Stenstrom completed his undergraduate education at Kansas State University, where he received his Bachelor's Degree in Animal Science in 1991. He continued his veterinary education at the Kansas State University College of Veterinary Medicine and was awarded his Doctorate of Veterinary Medicine in 1994. Surgery, ultrasound, and radiology are among Dr. Stenstrom's many veterinary medical interests. He is a member of the American Veterinary Medical Association, Kansas Veterinary Medical Association, Kansas City Veterinary Medical Association, American Animal Hospital Association, American Association of Feline Practitioners, and the National Rifle Association. Dr. Stenstrom is also a member of Trinity Lutheran Church. Outside the hospital, Dr. Stenstrom enjoys spending time with family and friends, gardening, landscaping, fishing, and watching KSU athletics. His animal companions include his dog Jinks, and three cats, Cricket, Max, and Fizz. He and his wife, Dr. Kristol Stenstrom, also a veterinarian, are the parents of three children, Sofia, Arik, and Kjell.

Kristol Stenstrom, DVM
Dr. Kristol Stenstrom received her DVM degree from Kansas State University in 1994 and her certiﬁcation in veterinary medical acupuncture from Colorado State University in 2003. Upon completion of her certiﬁcation, she was selected to serve in an ongoing position as an instructor assisting in the training of veterinarians from around the world in the art and science of neuroanatomic veterinary medical acupuncture. She comes in on designated days to FVAH and does treatments in patient’s homes. Please call our office for more information.

What our Clients have to say.

"Falcon Valley is always so professional, friendly, and helpful!"


For general information, questions, appointment requests, call us at: